The goal of this set-building project was to construct a room whose image would accompany an article about the person of our choosing. I chose St. Lucy, a slightly obscure Catholic martyr who was executed  when her pagan fiancé discovered she was Christian. Her death was very odd- neither a team of oxen nor a fire could hurt her, but finally she was killed by a dagger. In some accounts, she pulled out her own eyes, or was tortured by having them gouged out, but in all the stories her eyes miraculously reappeared when she was to be buried.

Fascinated by this mysterious saint, I set her story in a more modern church, as if the strange series of events happened in the middle of her wedding ceremony. I carefully crafted pews, hymn books, banners, and an altar from wood, paper, and fabric, as well as details like leaves, hoof prints, and a mangled bouquet. On the altar rests a pair of eyes, barely the size of the head of a sewing straight pin, while a stained glass window looks down upon the aftermath.

I had a lot of fun with this set! I learned many construction techniques, and a good lesson about size and clarity in photographs. Enjoy!

In progress… I made some advances in the world of laser cutting to help me make precise furniture and scale models! 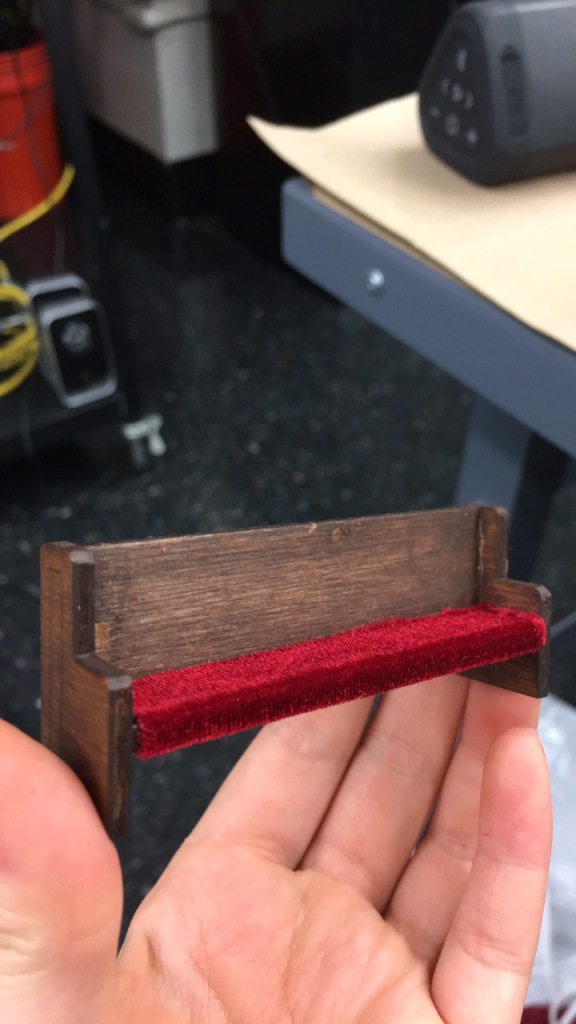